Spectators of Jesus the Christ

In this “Seven Crucifixion Statements of Jesus the Christ” chapter, I am a spectator reporting/narrating about and reflecting upon Jesus hanging, bleeding, suffering and dying on the cross for our sin. This 37:06 chapter summarizes Jesus’ life and synopsizes the “Spectators of Jesus the Christ” 500-page paperback, more than 400-page ebook and 15 hour/one minute audiobook. 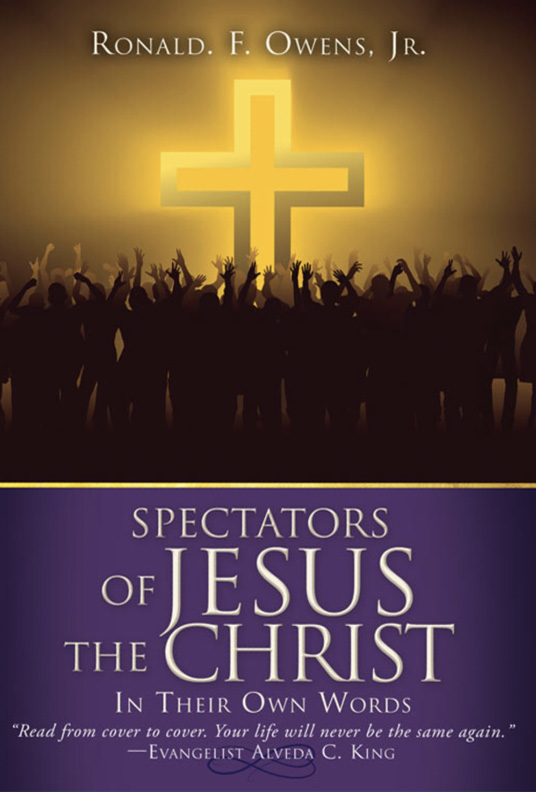 “Story of Rich Man and Lazarus” is an excellent book that conveys to us the urgency for us to be saved through Jesus Christ. It is clear —in the rawness of his writings which details the immoral corruption of the rich man— that we as fallen humans desperately need the Savior. Ronald F. Owens Jr. surpassed his creative literary work with his passion for the lost. The Holy Spirit anointed him with the ability to describe the fiendish fiery abyss of hell, and the magnificent majestic throne of Heaven. He brings home that urgency of salvation through Jesus Christ. I pray that many may be saved through his book.

Spectators of Jesus the Christ
“Read from cover to cover. Your life will never be the same again.”

The “Story of Rich Man and Lazarus” is a great book that explains the truth about the Luke 16:19-31 story. Ronald has a great ability to make the Word of God real and relevant. Young people should get a real understanding of this truth from the Word of God.

Wow!!! There are so many words that came to mind as I read this book. I was drawn in from the start. I literally saw the stories play out in my mind as I read. I nearly teared up reading the heartbreaking stories of both the “Story of the Rich Man and Lazarus,” albeit for different reasons. The Rich Man’s pain and anger drove him away from God, while Lazarus’ pain and anger eventually drove him back to the Father. Ronald brings these two men to life in a way that causes the reader to get into their minds. The ramification for rejecting Jesus and His gift of salvation and the eternal rewards is dire and everlasting. The blessings of repentance and faith in Jesus are out of this world! I love how he wove his family’s testimony into Lazarus’ story. He rightly ended the book with a pleading to unbelievers to repent and follow Jesus. Anyone who ignores, scoffs, mocks, or dismisses the realities of Heaven and hell after reading this book might be a reprobate.

“Story of Rich Man and Lazarus” is a wonderfully written book! It takes a red-lettered Jesus story and gives it a modern twist! It’s a scary reminder that I do not want to go to hell, and I will never wish anyone there! I cried when Lazarus was redeemed. I also cried at the description of his homecoming in Heaven! I recommend this book —for the saved and unsaved! 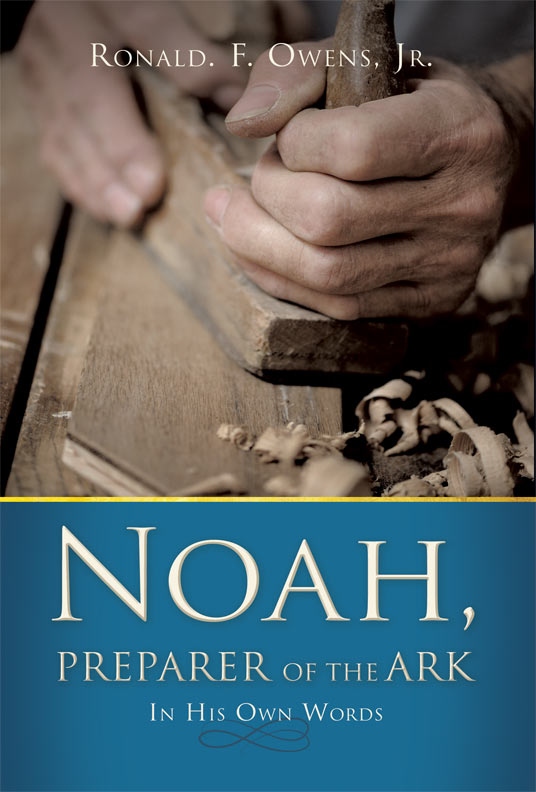 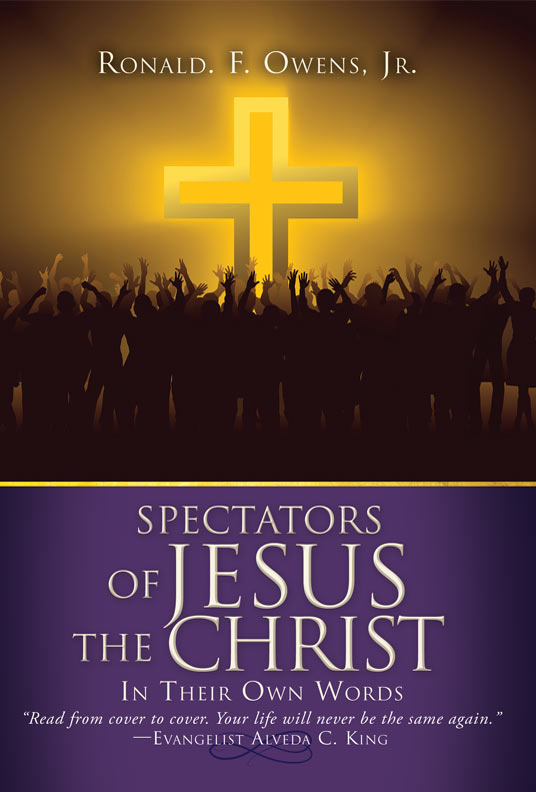 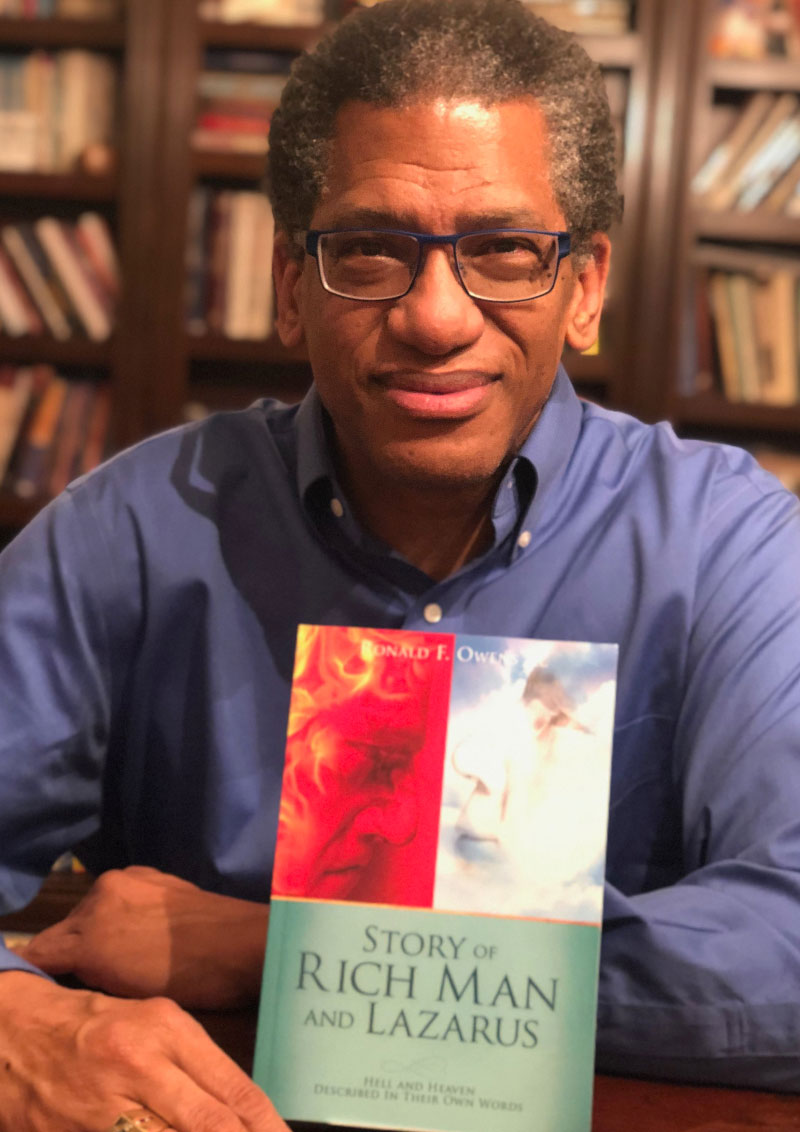 Ronald F. Owens Jr. accepted Jesus Christ as his Lord and personal savior in 1968 when he was 11 years old.

Owens is a communications professional who has tenured more than 30 years of writing experience. While working at his job by day he has rewritten portions of the Bible in newspaper format (called The Testament Spectator) at night, during the early morning hours, and on the weekend. He has studied the Holy Bible in the State of Israel three times and the Hashemite Kingdom of Jordan twice. His pilgrimages to the Holy Land have also augmented his writing.

“Story of Rich Man and Lazarus” is a powerful real life account of good, evil, free will and faith. Readers will see in this book that there is something much more powerful guiding our lives and something extremely powerful sweeping us into sin. It’s loaded with descriptions of “human temptation” and how partaking in sinful activities can lead a person on a path of destruction. This book is also packed full of stories where God/Jesus sends others to give us the inspiration to turn our lives over to Jesus and reject sin. We choose to live eternally in Heaven or hell.

Travel back in time with a modern day, first-person recollection of Biblical patriarch, Noah. As sin abounds, you’ll learn how Noah personally listens to God and toils to build the ark, saving his family and humanity. “Noah, Preparer of the Ark” is a fresh look at the age old problem of sin, the importance of obedience and God’s everlasting promise to His people.

I just purchased “Spectators of Jesus the Christ” and “Noah, Preparer of the Ark” and cannot wait to start reading! I am so intrigued by the first-person perspective in which this author writes, and am expecting new revelation just by walking in each character’s shoes. Bring it on, LORD!

Author Ronald F. Owens Jr.’s unique perspective in illuminating Scripture captures your mind and compels you to read on and further search out the iconic stories in the Word of God. His books are a must have in every Christians book collection.

Your latest book is a page turner and to the point. “Story of Rich Man and Lazarus” addresses the reality of the day in which we are now living.

Throughout the years I have rewritten about ten percent of the Holy Bible in newspaper format. I titled this publication, The Testament Spectator, which birthed me writing books about Bible people published in their own words. You are more than welcome to download any or all of these Testament Spectator editions at no cost. 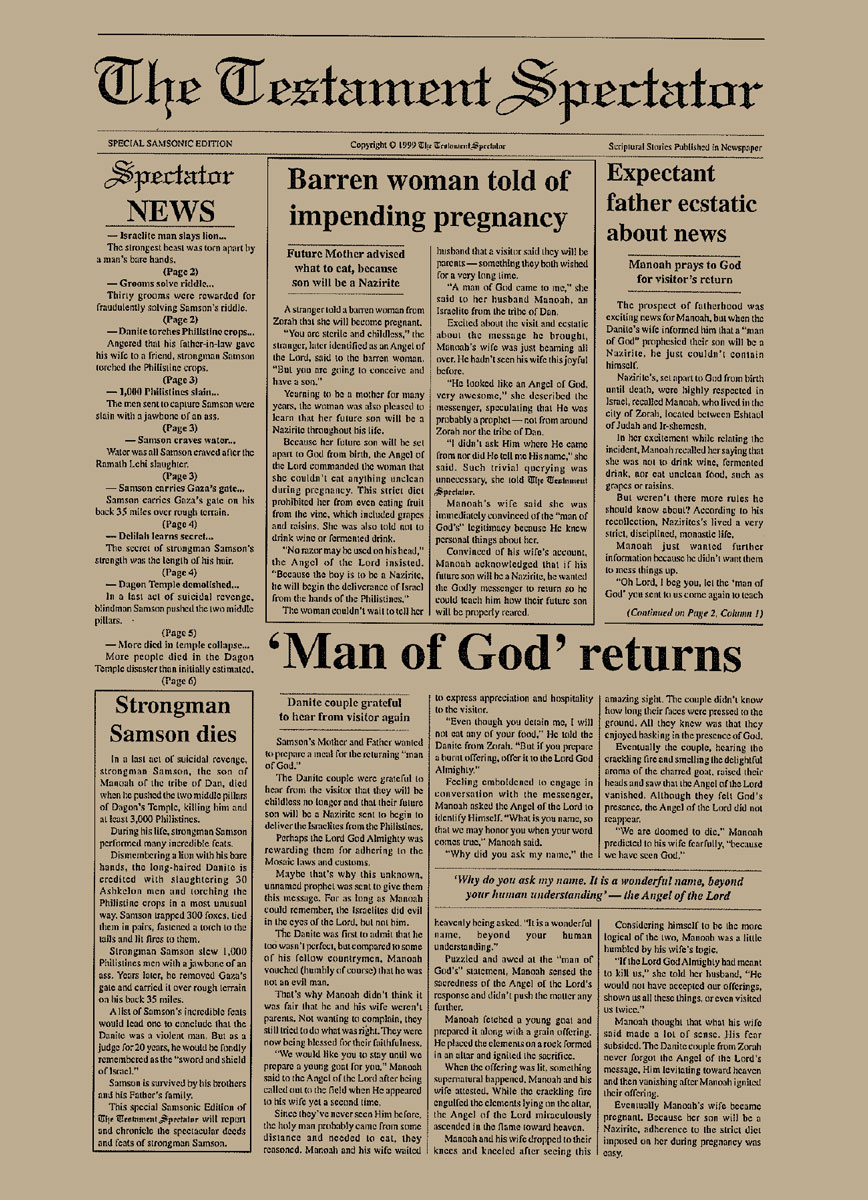 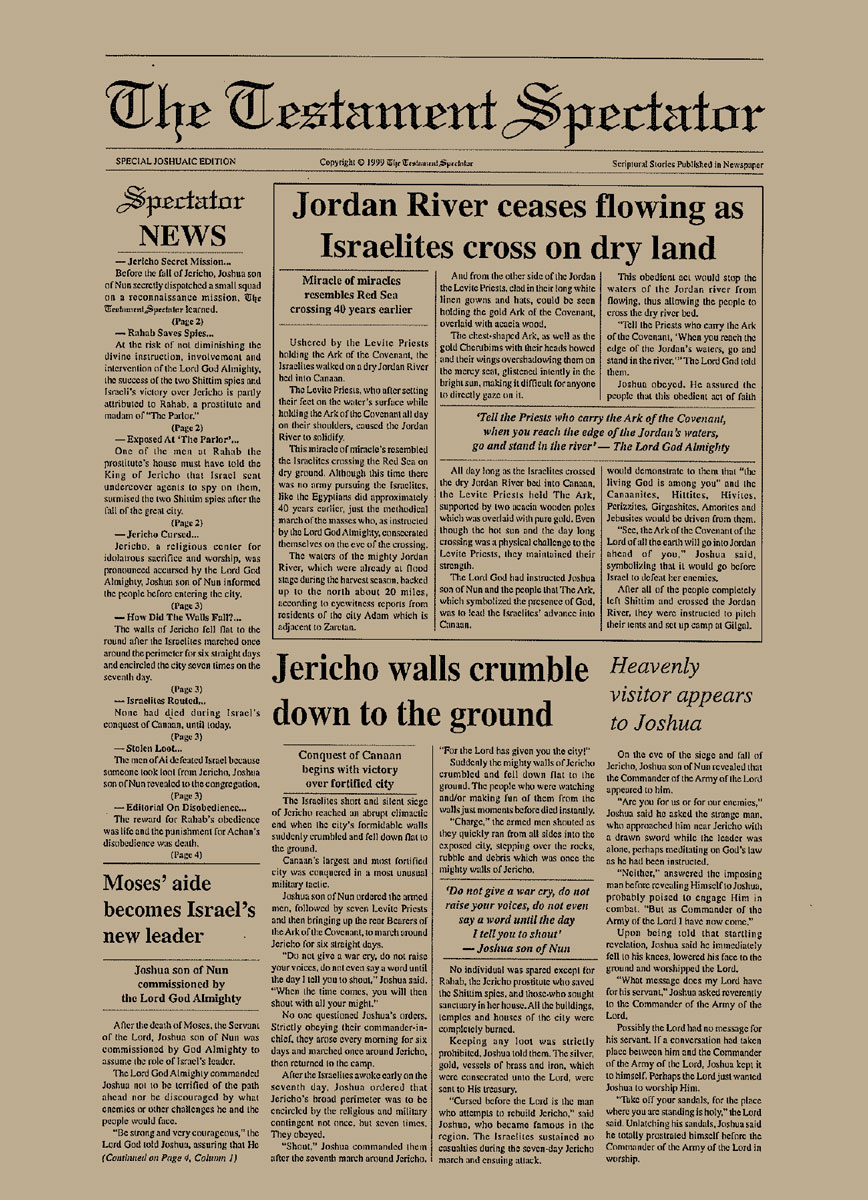 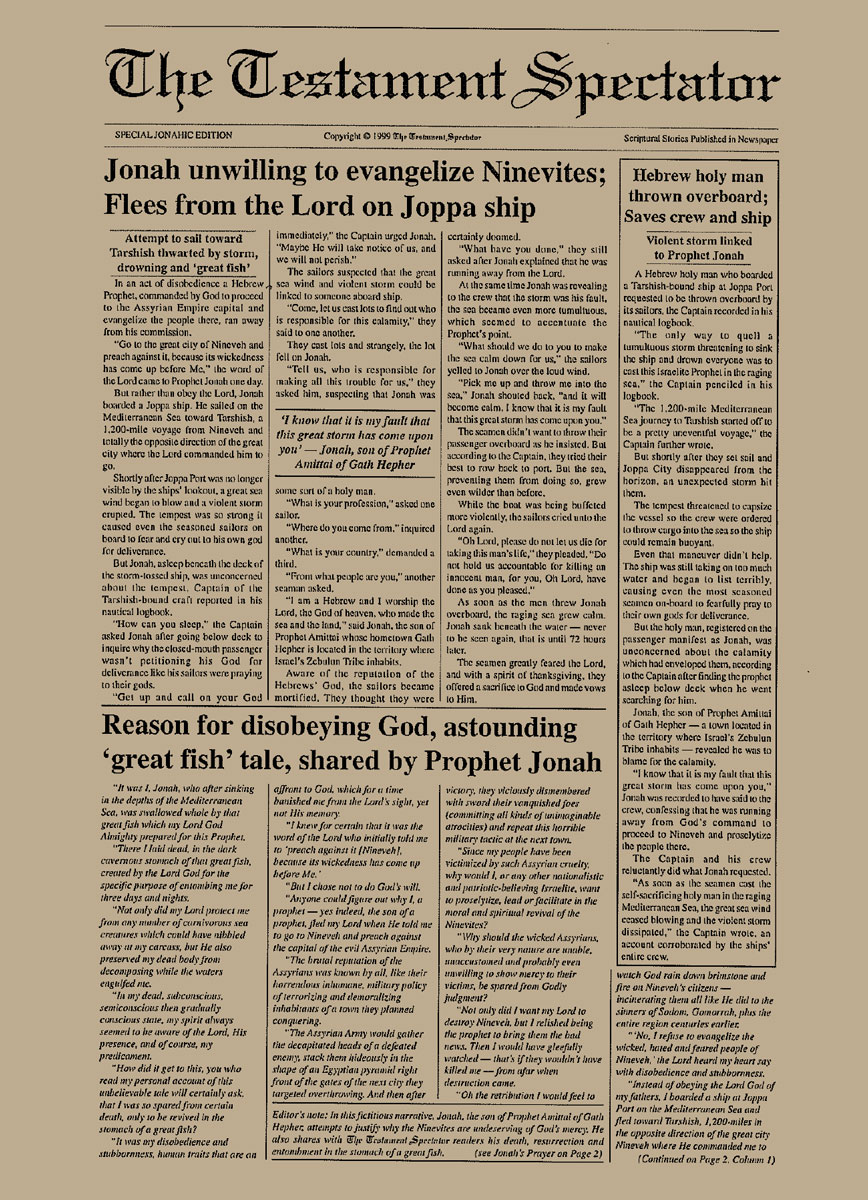 Tune into the Podcast

This is “Lift Him Up With Ronald F. Owens Jr.” podcast, and I am an author whose books and Bible newspapers represent a new and innovative genre of Christian literature.

I will discuss the Bible, opinions and current events.

Thank you for joining me as we “Lift Him Up!”

Listen Now To The Latest Episode 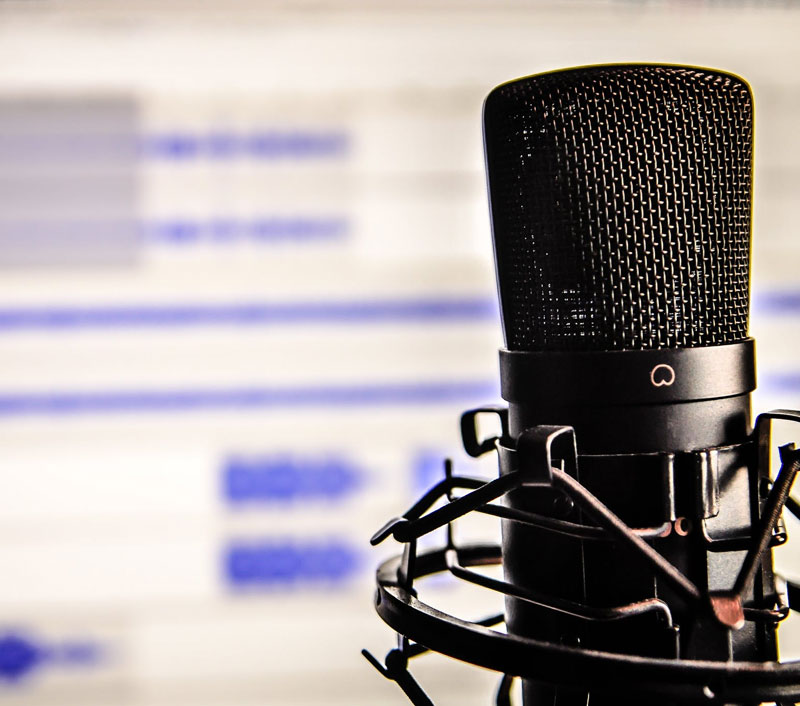 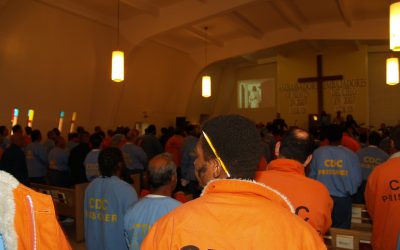 A Miraculous Time at Tehachapi State Prison These are incarcerated men at the California Correctional Institution (CCI) in Tehachapi, and on November 10, 2007 they were praising and worshipping the LORD at CCI’s Chapel. Many times we read about the astounding miracles...

END_OF_DOCUMENT_TOKEN_TO_BE_REPLACED

Requesting Help to Donate My Books to Inmates

This is a plaque that was presented to me 15 years ago yesterday, and I received this service award for ministering at Sacramento County Juvenile Hall. Lovelei C. Sterling (Nana), my late 106-year-old maternal grandmother, was presented an award as being the eldest...

END_OF_DOCUMENT_TOKEN_TO_BE_REPLACED 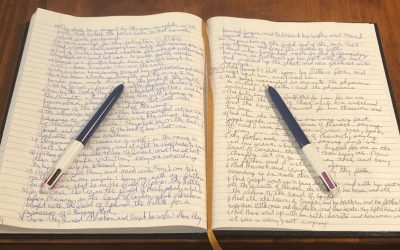 Let Us Inscribe God’s Word on Our Hearts

This is a blue blank book, and from December 30, 2021 to February 18, 2022 I wrote the Book of Genesis in it. As you can certainly attest reading, studying, hearing, memorizing and meditating on The Holy Bible is vitally important for our spiritual walk with the LORD,...